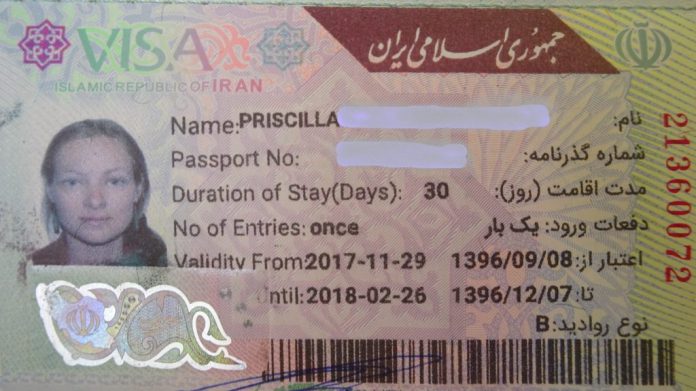 This is adopted from: https://en.wikivoyage.org/wiki/Iran

Visa restrictions: Entry will be refused to citizens of Israel and to foreign travelers with any evidence of having visited Israel — not just Israeli entry stamps, but also Egyptian and Jordanian stamps from border crossings with Israel — except that if you had an Israeli visa that expired more than a year before you apply for an Iranian visa, you may be allowed entry into Iran. Egyptian and Jordanian visas have no effect on applications for Iranian visas.

Under rules passed in 2016, travelers who have visited Iran on or after 1 March 2011 are not eligible for visa-free entry to the United States of America under its Visa Waiver Program (VWP), unless their visit to Iran was for diplomatic or military purposes in the service of a VWP country. They need to apply for a visa to enter the United States

The Iran tourist visa is issued for up to 30 days and is extendable. It must be obtained before travelling to Iran and valid to enter for 90 days from the issue date. Approved Iranian travel agents can apply and get visas for all foreign nationals (except Israeli passport holders).

To apply and get your visa you must contact an approved Iranian travel agent, or go to an Iranian consulate. After receiving your personal data, they apply to the Ministry of Foreign Affairs. Your visa will then be authorised by the MFA and faxed to the Iranian consulate near you. Your travel agent gives you a visa authorisation number with which you can refer to the consulate to get your visa. The visa authorisation number, however, is valid only in the consulate you have asked them your visa to be issued in. The number they give you is just an “authorisation”. This reference number means that your visa has been authorised and approved by the MFA but is not the visa.

Depending on your nationality, you may be required to present at the Iranian consulate in your country to have your fingerprints taken. British and American passport holders will be fingerprinted upon arrival.

You may also need to provide a letter of recommendation from your embassy if you are applying outside your home country, a photocopy of your air tickets in and out of Iran and any student or press card.

Normally, all tourist visas issued by Iranian consulates have a “3-month” validity. The visa allows you to stay in Iran for up to 30 days, (sometimes you can get the tourist visa up to 90 days), although the duration of your visa is at the discretion of the MFA. (All tourist visas will be issued as a single entry, unless you request the approval from Tehran.) Tourist visas must be used within 14 days from issue, but the maximum duration of your stay is still 30 days.

Rarely, you may be asked to provide a letter from your employer or proof of funds. Visas are generally valid for three months that is you must enter Iran within three months of issue.

Depending on your nationality, issuing a visa may take 30 days or more.

There are reports that it is possible to get a visa in 10 days in Istanbul consulate, especially for German passport holders.

Types of visa: Entry, Transit, Business, Tourist and Journalist. Fee varies according to nationality of applicant, type of visa and the existing regulation between countries.

A visa cannot be issued for passports which have a validity of less than 6 months. Exit permits required by all (often included with visa).

Transit visas are usually easier to get than tourist visas (usually for one or two weeks) and very useful for people travelling between Europe and South Asia. Various travel agents inside Iran help you obtain visas, often through their home pages.

You can get an extension for your transit visa usually valid for five or ten days, inside Iran easily but once for the same number of days as the original visa.

For foreign drivers carrying cargo to Iran or other countries, it’s necessary to co-ordinate in advance with the diplomatic missions of Iran.

Extending a tourist visa is very easy and can be done in most cities. Some travel guides say not to do this in Tehran as it is very time consuming. This is no longer the case and the process of extending a visa in Tehran can be done in just 1 hour (including tea offerings and being the object of curiosity in the office). Extending a visa a second time requires the passport to be sent to a department in Tehran (no matter where you extend your visa from) and thus takes longer time than doing this the first time. The tourist visa can be extended once or twice at most, each time you can get 15 days more. The price of extending a visa is fixed rate 300,000 rial.

Although it has become easier to get a tourist visa, whether the process takes one day or one month depends largely on your nationality and the staff of the embassy you are applying to. Your best bet is to apply to the Iranian embassy in your own country at least three months before your departure, but it is possible to obtain one while travelling in other countries, with varying degrees of difficulty. Women need to make sure they are wearing the hijab or a head scarf in their submitted passport-sized photos.

A valid passport and a visa are required for the citizens of most countries for travel through Iran.

A 30-day tourist visa on arrival (VOA) is issued on arrival at the airports of Tehran, Mashhad, Shiraz and Tabriz to people from about 58 countries, including Azerbaijan, Albania, Germany, Austria, Armenia, Uzbekistan, Spain, Australia, Slovenia, Slovak, United Arab Emirates, Indonesia, Ukraine, Italy, Ireland, Bahrain, Brazil, Brunet, Belarus, Belgium, Bulgaria, Denmark, Russia, Romania, Japan, Singapore, Sweden, Switzerland, Syria, Saudi Arabia, Oman, France, Palestine, Cyprus, Kyrgyzstan, Qatar, Croatia, South Korea, North Korea, Colombia, Cuba, Kuwait, Georgia, Lebanon, Luxembourg, Poland, Malaysia, Hungary, Mongolia, Mexico, Norway, New Zealand, Venezuela, Vietnam, Netherlands, India, Yugoslavia, and Greece. If you ask nicely, they might even give you up to 90 days instead of 30. Tourist visa on arrival can be extended by 15 more days. 3-month tourist visa on arrival are issued to Chinese tourists (including Hong Kong and Macau) as well. Citizens of the USA, UK, Canada, Somali, Bangladesh, Jordan, Afghanistan and Pakistan cannot obtain visa upon their arrival in airports, and they are required to have the visa stamped in their passport in advance. Instant visa is obtainable for tourists from the above-mentioned countries and it does not apply to those who hold official passports, businessmen or journalists. There is no restriction for foreign tourists to obtain a visa upon their arrival at Iranian airports several times within a year.

To get the visa on arrival, be sure to have a legitimate confirmed accommodation for at least a night in Iran, e.g. hostel or hotel. Write down the hostel name, the address, and the phone number as the visa officer will call your accommodation. Entry could be denied if you just write down a random hostel or hotel as they won’t be able to confirm you to the visa officer. The visa generally costs €75 for most countries (Europeans and Thais). However, the visa cost differs from nation to nation, for example for Indonesians, it costs €45 and for Croatians €50. There is no need for passport photo, the visa is issued with a copy of the photo in your passport.

Insurance is mandatory and you will need to show proof of it to get the visa. Have a confirmation by your insurance ready that clearly states that it is still valid and that it covers Iran. If you don’t have insurance, or if your insurance is rejected, you’ll have to buy insurance there for around US$16 or €14.

Your bags probably will not be searched for salacious material, but if any is found, it will be confiscated and will complicate your arrival. Don’t try to bring in any magazines or books that might offend strict Islamic sensibilities or criticise the government.

As a notable exception, nationals of all countries including Americans are allowed to travel to free economic zones of Kish, Qeshm and Chabahar without a visa for stays of 14 days or less. Kish and Qeshm are easily accessible from Dubai.