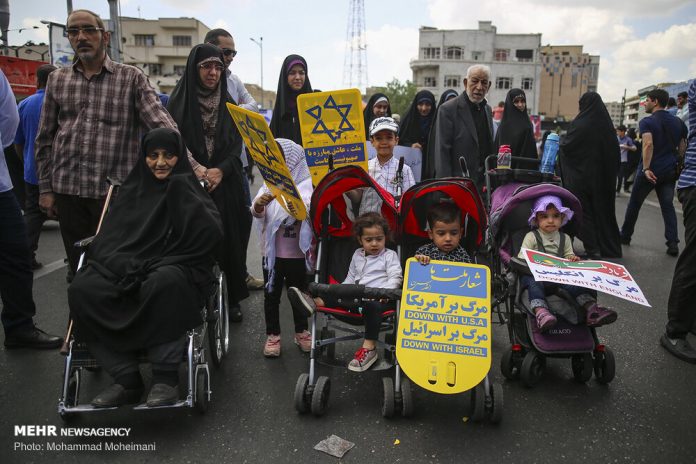 The disputes between Palestinians and Zionists have arisen again and the name of Iran is heard even more than in the past together with Palestine. Iran may be the only country that has constantly defended Palestinian rights now for more than 40 years. I have written this post about two years ago (before COVID-19) to describe Iran’s behavior and intention.

Memorizing a Quds Day in Iran

Today, it was Quds Day in Iran. Quds Day is an annual event that was initiated by Ayatollah Khomeini in 1979 to express support for Palestinians against Israel. This event is held on every last Friday of Ramadan, but in some of the European cities, it is held on the last Saturday or Sunday. In Tehran and other cities in Iran, there are official rallies on this day. A lot of people come to the streets (About ten paths around the city center are specified beforehand) while they are fasting, walk until noon, and then they go for Friday Pray. They bring banners and slogans especially against Israel and Zionism but also against American and English colonialism.

When we arrived close to one of the paths, it was about 11 AM (2 hours until noon). All the streets were full of cars and we couldn’t find a parking place easily. We kept searching for about half an hour and finally found a place far from the destination. The destination is where people gather for the pray, i.e. the University of Tehran. It is not too bad that you stop far, because people like to demonstrate a distance to reach the destination. However, it was hot, and going there while fasting (and not being able to drink water) made it a bit difficult. Most of the people participate with their family and it’s an enjoyable activity especially for the children who sit on their carousel, run freely on the streets, and play with their balloons bought by their parents. Some people come in groups with their colleagues and associations. They usually chant slogans such as Down with Israel, Down with America, etc. The streets around the city center that are special paths for the rally are blocked by police and no car is allowed to enter. There are some official vans to bring old and disabled people to the destination.

We walked about one hour to reach the University of Tehran. There’s a big Mosalla (where people gather to pray) in the university. When it is special days like the Quds day, this Mosalla is full of crowd and the crowd spread out to the campus and then toward out of the university in the streets. Entering the University requires us to pass the security check so we preferred standing outside on 16 Azar Street. There are loudspeakers in all the streets around the University for the people to hear the event. People who want to sit outside of the Mosalla, have to have their own mats and rugs. So, all the street is covered by colored small rugs that people have brought to sit and pray on. Early-comers have the advantage to sit under the tree shadows, but others have to sit under the sunshine for about an hour until the pray finishes.

The Iranian solution for the Palestine-Israel battle

Before the pray starts, the head of Iran’s parliament -Ali Larijani- spoke about what trump is doing in the middle east and what he has called the “Deal of the Century”. He also recalled Iran’s solution about the Palestine-Israel battle which has 4 stages: 1. Returning of the displaced people to their hometown. 2. Holding a referendum in the country with the full participation of all the original populates including all groups and religions: Muslim, Christians, Jews, etc. 3. Establishing a political system based on that referendum. 4. The established political system deciding about non-local residents in the lands. He said it is so strange that the US and other western countries don’t care about democracy and human rights in this region.

The Leader of the Islamic Republic -Ayatollah Khamenei- predicted Israel won’t exist in 25 years in a speech in 2015 and he said this prediction is based on what he understands about rules of the universe from the Quran -that ‘falsehood’ won’t last long. Immediately, Bibi, the Israel prime minister said Iran wants to kill all of us and asked the world to rescue and support them. After a while, Khamenei said in one of his public speaks that it’s a ridiculous interpretation and Israel won’t disappear by a war started by Iran or any of its allies but it will destroy from inside.

Read more: How will the “abolition of Israel” be accomplished? – Khamenei.ir

The “virus of Zionism” won’t last long and will be eliminated – Khamenei.ir

What’s the rationality behind Iran’s behavior

What I understand is that the dispute between Iran and Israel from the viewpoint of Iran is not rooted in religion (Muslims-Jews conflict or fighting just to catch the holy land) or mere political and geopolitical reasons. Iran is fighting Israel just for its own values. Iran believes it had been unjust to bring some strangers from all over the world (even though someday in the past, this land’s main occupants were the Jews) and occupy the lands by violence and kill thousands of its residents (including women and children) to consolidate their settlements. The United States has been obviously supporting Israel in all this half-century and offending any international laws or human rights. Now everyone knows that Israel is established because the US likes to have direct influence somewhere in the middle-east and of course, no country is courageous enough to really confront it.

Iran’s persistence on the freedom of Palestine may seem extremely irrational in normal politics when calculating the costs of international sanctions and other materialistic costs towards the country… and makes one of the unique points in Iranian politics.

Watch to see what’s going on in the holy land from a neutral point of view: