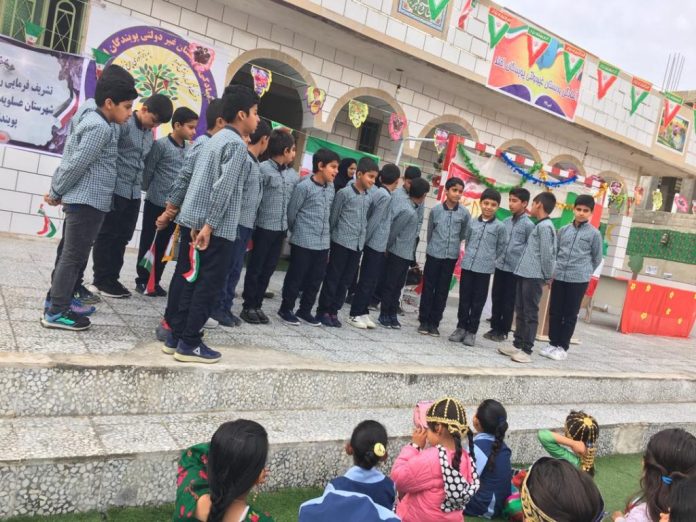 The 12th of Bahman (1st of February) is an especial day for the Iranians. The day that Ayatollah Khomeini returned to Iran after about 15 years in exile. Only ten days later, on the 11th of February 1979, the Revolution was victorious. These ten days are commemorated every year as “Daheye Fajr” -literally, ten days of sunrise. During these days, the stories of the revolution, its slogans, and symbols are seen especially on the official media, inside the schools and mosques, on the streets, and in the government offices. And on the 22nd of Bahman which is a holiday in Iran, people go out for street rallies.

One of the things that’s heard frequently during these ten days is the historic memorial songs of the Islamic Revolution. These songs were created by different revolutionist groups reflecting their thoughts and feelings and motivating people to make their dreams happen. They are called ‘Sorood’ in Persian which is a specific type of song or anthem that’s usually performed in groups -like a choir- and it’s usually about a social phenomenon. The poems were reflecting the epic ideas of revolution, however, very simple and in a popular form. The songs were created and performed mostly with amateur instruments inside the houses and undergrounds.

These songs are very important in the sociology of the Islamic revolution. Different groups made their own songs with different themes. The main slogans of the revolution such as independence, liberty, Islamic Republic, anti-colonialism, anti-Americanism, martyring, etc. are clearly found in these songs. There were tens of such songs through which maybe about twenty became really popular that every Iranian can now remember them well. However, many of them faded gradually as time passed and some groups were weakened.

If we want to briefly review different themes of the revolution songs, many of them were made before the victory of the revolution in order to promote the revolutionary views. They usually drew the undesirable image of the status quo that had to be changed, praised the battle and martyring, and advised for resistance. Also, some of them were promising the day of victory when the world is a better place.

Some of these songs were praising the leader of the revolution, Ayatollah Khomeini, the Imam showing their lovely relationship with him.

Also, another important strand of revolution songs was specified to the defense and confronting the enemies after the revolution and respecting the martyrs.

And: America America by Sabzevari (The school children are performing it inside the 22nd Bahman Rally): https://www.youtube.com/watch?v=a-SX_wT1L14