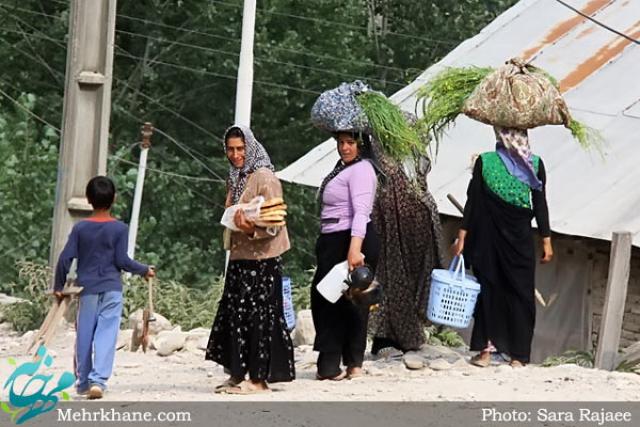 Today, I went to one of the villages with my brother in South Khorasan Province, around Birjand. The name of the village was Char Cheshme (literally means Four Fountains). A very small village with maybe not more than 100 inhabitants. Like most of the villages in Iran, their main livelihood is farming and animal husbandry. It is in the middle of spring and the weather is so nice and the trees are green. These villages that are close to the city are nowadays attracting many people, especially who want to return to nature and enjoy. Very close to this village there was a great hotel called Koohestan (Mountains). The name comes from the mountainous environment as in most parts of Iran. The hotel and its restaurant give you a lovely view of the mountains. Although this traffic of strangers has had noticeable impacts on their daily lives, my experiences say that the villagers are always welcome and ready to talk and offer their handmaids and food to them -sometimes they sell.

The village was built on the hillside. The trees in this part of the country are mostly Annaab (Jujube), Zereshk (Berberis), Toot (Morus), Gerdoo (Walnut), Saffron, Aloo (Plum), and Gilas (Cherry). In this session only we could find Toot a lot which is in many different types but in two main: white and black. There’s a rule in Islam that if a tree branch is stretched out of the personal gardens to the street, you are allowed to use the fruit for free as much as you want to eat. So, we could eat a lot of Toot!

Iran is placed in a dry area. One-third of the whole land area is desert. Among others, the South Khorasan Province is situated in one of the driest places in the country (with an average of 114 mm rain annually in all the province). So, there has always been issues with water. These people have dealt with this issue with different technologies, maybe the most prominent one was building Qanats. This technology works by connecting many deep wells along underground water reservoirs and making something like a river tunnel under the ground. This river comes out of the foothills and people use the water for farming and fresh drinking water for animals and people. This technology doesn’t overuse underground water because it is supplied only by the excess water of the wells, therefore, is sustainable. These Qanats are seen in all the villages in drought areas (like this village) and is the main source of water (There are thousands in the country). People sometimes store water in ponds or pools of water in spring to use them for the summer. The Qanats need to be revived (they are seen as alive creatures!) after a while, otherwise, they might dry out. However, many of them still have water after centuries especially in years with good rainfall. Qanat is an incredible technology for traditional times. The longest discovered Qanat in Iran is about 70 kilometers long and some are constructed on more than 40 wells! How they have done this and how did they calculate the route from several tens of kilometers away right to their place? Among others, there are some Qanats which are very especial. One of them is called Zarch in Yazd province which is said to be 3000 years old. In this construction, three qanats are directed from long distance to a pool of water under the ground (called Ab Anbar means water storage) to store water for drinking and other home use during the year. How have they calculated the three routes to reach one point? You can visit this Ab Anbar going down about 60 steps under the ground in a long historical path.   Another extraordinary example is the Moon in Ardestan which is, in fact, two parallel qanats in two levels. People had built two tunnels in a long way without mixing two streams of water. But there was a possibility that the water pours from the upper one to the lower in the mid-way wells. So, just right there, they have bent path of the upper one and they bent it back to the same straight route. You can visit the last well and see how it became possible.

When we were resting near the qanat and drinking its cool freshwater, we saw an old farmer sitting close. My brother started the conversation with him: “How is the water this year?” he asked. Water is maybe the main point for starting the conversation in dry areas of Iran. “there’s no problem”, he answered, “this year after several years, the rainfall was pretty good.” Then my brother asked about how they deliver their crop to the market. It seemed that he has a large family and all the fruits are used inside the family. In traditional families of Iran, they had many children. These children were not only consumers but they were the workforce for their families and took responsibilities in the collective life. They took care of their younger siblings and when the parents were old, they looked after them (See more here).

He then started to tell us about his children. He said they are highly educated and they are employed in governmental organizations and so they live in Tehran. This is what has happened to the most rural areas in Iran. Children usually finish their school in their village or the neighbor villages and then apply for higher education in universities. If they are conscientious and intelligent enough, they go to good universities in Tehran. Their parents support them a lot because they see it the only way for future success. They free them from farming and other work and let them study their lessons and then pay for their education. It’s obvious that although they are highly educated, these people don’t have skills for rural jobs like farming and also, they find living and working there not suitable and prestigious enough for an educated person! So, they never return to their hometown for the rest of their life. Many like to become employed in easy, less risky, and highly appreciated jobs especially inside the government as civil servants (as it was also evident in the sayings of the old man). This is how most of the villages are becoming empty in Iran. Climate change is also supporting this trend that even many of the uneducated ones prefer moving to the cities and becoming simple workers and suffering the difficult life in marginal areas of big cities… All of these and many other issues are the results of rapid development in rural areas which has made them poor and dependent on the cities despite high education, health, and infrastructure utilities.

The rural society has not been always like that. I can remember my talk with one of the local individuals from a traditional tribal community (Abolhassani tribal confederacy) one year ago during my interviews for my Ph.D. thesis. He told me about different practices and technologies of his ancestors in farming and animal husbandry and how they were more effective than what is taught in the universities and promoted by the government and I understood that it is not only some famous technologies like Qanat but also many other ways of doing things came from their creativity as a response to adaptation to the nature. One of them was Kooch (Pastoralism) which has been usual in different parts of the country from a long time ago. The tribes had, in fact, two different places to live: One in the summer and the other in winter. The distance between them was from 20 kilometers to maybe 500. The reason for this suffering migrations was enjoying both natural pastures for their animals. It was done in a pretty sustainable way that nature has enough time to renew itself.

Read about and visit Nomads in Iran: https://nomad.tours/nomads/7247/what-is-kuch-nomads-epic-festival-of-migration/

Then the man in Abolhassani had also some ideas for the new climate conditions to overcome drought. He presented some of these ideas with the help of an NGO in some international conferences and awarded some prizes. Then he had put this prize in a mutual fund inside the village to keep the money and just lend it to anyone who needs money for investment. When I asked him why you put your own money in a shared common pool, he couldn’t understand my question at first! He told me that’s what all my ancestors have done and if the quality of life increases for everyone in this area, then I can stay here and live good. Otherwise, I can’t live single here. I loved this pretty advanced way of thinking and saw how it is rooted in the rural tribal cultures. Another thing that worth mentioning is how the rural people worked as a community and benefitted their collective living, though this is nowadays weakened due to empty villages and wrong policies. He told me how the tribe elders were responsible for everything: Coordination, natural resources management, judgment, security, etc. It was also true for the villages which were managed by landlords in feudalism era. There were notable collective systems of doing things such as Bone, Vareh, Borraborri, etc. Wow! So much to write about this subject? I will write about cooperation in Iran more in a later post!