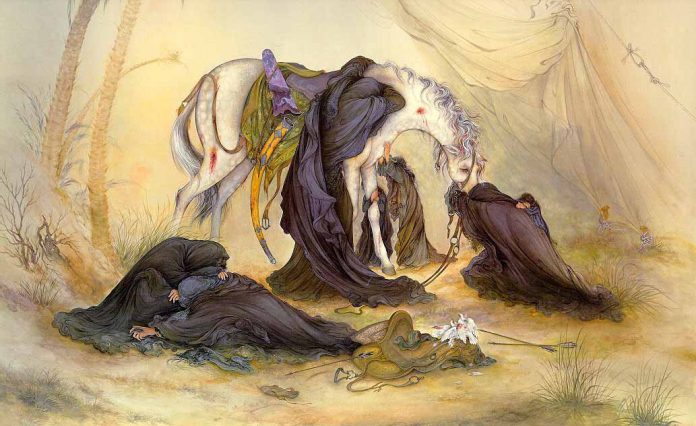 These days, if you walk along the streets in Iran, you feel something has changed. Some people are wearing black or gray clothes, the same are the houses decorated with black flags, also there are some tents established beside the streets. If you go to the traditional parts, even in modern cities and especially at night, you might notice that everything has changed. Many households have opened their doors to everyone and holding events inside. Some streets are blocked with special processions. But what’s really happening there?!

This is Muharram, the first month of the Hijri calendar. And all these are for the commemoration of what happened in 10th of Muharram (called Ashura) in year 61 AH (680 AC) in Karbala (a city located in Iraq). But what it is? I want to convince you not to confine our search in Google Image -which is unfortunately badly biased reflecting what rarely happens out there- and let’s see again what’s really happening in Iran and why?

Prophet Mohammad started his mission in Hijaz territories (now in Saudi Arabia) in which people were living in a very inferior lifestyle and unequal society, the rich people exploiting the poor and the baby girls were killed because of the fathers ashamed owning a female child. The primary tribal values meant everything, giving social status to people, and wars took place between the tribes often to gain more power. Prophet Mohammad changed this situation in a quite short period of time (about 23 years) by his attractive and integrative character and of course, by standing in front of the powerful people -who were most afraid of any change to this situation. He established the government based on justice and brotherhood and confronted the oppressors. This government was extended in all the Arab region when he passed out. After the death of Prophet Mohammad, the new-born Islamic community gradually started to change back to its past when the hidden enemies who had lost their power struggled to gain their power and influence again in the society, but this time in the name of God and religion! Corrupt people became governors and not later than 50 years after the prophet, his previously main enemies were ruling the Islamic territories in a totally opposite way than how he dedicated his life on. Imam Hossein, the 3rd Imam of Muslims, was living at that time. He was watching this awful situation but he was completely limited by the government to do anything in response. At last, he found no way other than standing in front of the government to show this is wrong and make people aware. There’re many of his quotations in historic texts describing the reasons for his movement. He believed if the situation continues, all the divine values will definitely be lost or drifted away from the teachings of the prophet. He finally decided to make a very salience movement in society -although it was really risky and dangerous for him and his family.

The story of his movement which was occurred about 14 centuries ago is really exceptional among other similar events in that time, regarding the credibility and frequency of its narrations in remaining historical texts. History clearly tells us how he sacrificed his bests in life to revive the destroyed values in society. Although many people were dissatisfied with the corrupt governors -as they primarily asked Imam for the revolt- they were strongly intimidated or tempted (with money or ruling positions) so that only about one hundred -sometimes said 72- people were ready to support Imam in that time. This small number was in front of about 30 thousand enemies in front. Although it was definite that Imam and all his followers would die in this unequal war, he believed that this is the only way to raise the confronting voice and stimulate a further change in society. Even all during the war, he tried to admonish people in the enemy group and show them the right way as he was really compassionate to them. Instead, the enemies were so brutal that they even deprived his family of water and he witnessed how all his great and loyal followers were killed in a very bad way as they even killed his 6-month baby in his hands. At last, he was also killed cruelly as his head was cut and the enemies run their horses on his body and took out his clothes and chanted around his body! Then his family and children were captive by the enemies and brought to the cities to be humiliated in public. Two of these captives were the Imam’s sister and brother. When they were brought to the miserable ruler for his victory celebration, these two -especially the sister, Zeinab- bravely told everything to the audiences about the unequal and oppressive war and enlightened them about who is right and who is not. These speeches made everything completely turned around and people started reflecting about how they were deceived by the governments and how they were drifted from the teachings of the Prophet. Years later, the aware crowd moved against the corrupt ruler and all the main actors in the war of Karbala and all were killed and defeated…

Read more on Who is Hussain global campaign website: https://whoishussain.org/who-is-hussain/

It was only a short summary of the story, but many details about his travel, Imam’s speeches, his followers, and his families are also available in the history, thousands of books written about that and analyzed what happened that time; however, not everything that’s common in popular culture about the event is credible and true. Today that we look at the story, we really understand that it was the Imam who won the war as all his goals were achieved and it’s still lively teaching us new lessons. After Imam Hossein, the other Imams frequently recommended their followers to speak about this movement, not to be forgotten. They also advised people to cry when hearing about this sad story. This crying isn’t only something emotional without any rationale -e.g. like what we do when one of our relatives die. But this is to make our heart congruent with our mind to make real action. We cry because we see how much humankind could become violent, and on the other hand, how a man can give his everything for the satisfaction of God and reforming society. In all the story of his movement, we can understand he didn’t want anything for himself and he was really benevolent even about his enemies and murderers of his relatives. He was killed to revive the universal values, as he described himself: “If you believe in no religion, at least be freemen in your life!” We also cry to show ourselves following the same way and preparing to act like that. The main movements of Shia against oppress and corruption have been affected a lot by this event.

Thus, the only things that are advised in Islam about this event are coming together, remembering it frequently by reading the historical narratives, and crying for that (the most recommended time to do these are the 10 first days of Muharram). However, its form has been changed through history and differ among the nations. In Iran, people hold from very small events inside their houses to very large ones in a public mosque, Tekye -large tents established in open spaces only for this time of the year-, etc. The program normally includes a speech from a clergyman and Maddahi by a Maddah. Maddahi is reading a part of the story or a related text in a sad voice while others cry and also singing poems about that while others repeat and make the rhythm by hitting on their chests -called ‘Sine Zani’. There are traditionally thousands of poems created about Imam Hossein and his disciples that make very rich folklore showing the deep integration of this event and its related rituals in the Iranian culture. These poems, usually recall some part of the event in a respectful way and with allusions so that they don’t usually express the awful facts explicitly but the audience can understand and cry (so, despite their importance, it’s very hard to translate these poems to English 🙁 ).

Another form is processions on the streets carrying different symbols and do ‘Sine Zani’ as groups which are called Daste. It’s still very usual especially on 9th and 10th of Muharram.

Another traditional form, which has been mostly specific to Iran, is called Ta’zie Khani (Or Shabih Khani). It’s a kind of street theater showing parts of the story alive, again using poems in dialogues and sometimes musical instruments. People stand around, watch, and cry.

And another ritual which is started recently in some cities of Iran is called Shirkharegan-e Hosseini literally means ‘Infants of Imam Hossein’. In this event which is held on the only Friday during the first 10 days of Muharram, the mothers who have infant children bring their child with special clothes to a public place, remembering how Imam’s 6-month baby was murdered that day and he dedicated him to God.

And finally, what’s very usual these days is delivering free food in the streets and houses.

While all these rituals are pervasive around the country -and sometimes in other nations such as Iraq, Lebanon, Afghanistan, India, etc.- each region also has its own. Some famous ones are Nakhlgardani, Qalishooyan, etc. Many people who have migrated to other places, prefer to go back to their hometown to participate in their own events.

See this documentary by Press TV about Imam Hossein’s movement and Ta’zieh: https://youtu.be/qNJnboywgI0