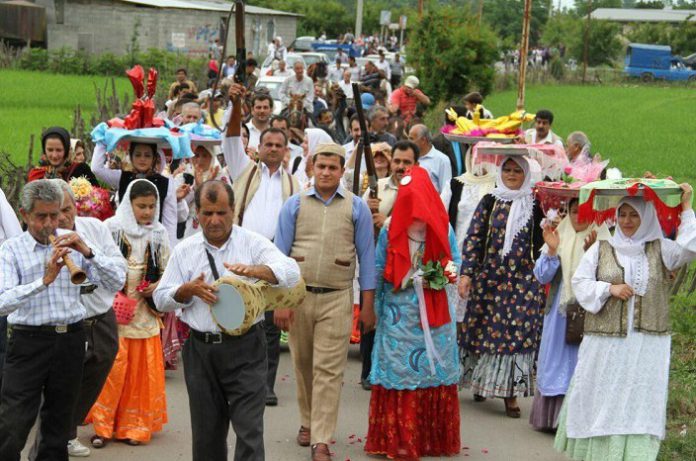 Family life is an important part of regular Iranian life. Just like any other parts of the world, the family starts with a marriage! It’s usual in Iran that the boy asks the girl for marriage in a formal meeting called ‘Khastegari’ held in the girl’s house. In old times, most of the marriages were between the relatives or close neighbors so that both sides knew each other very well and there was a little risk for making a wrong choice.

In the traditional form of marriage, the boy sees the girl in public places or she is introduced to him by his mother, other relatives, or friends. Then if he likes her regarding the appearance and visible behaviors, asks his family to call the girl’s family to set a meeting (these days the youths prefer to talk and visit each other more before the families enter the process). In the meeting, the families (fathers and mothers) talk to each other and the boy and girl also talk often in a private room. A few days after the meeting, the boy’s family call the girl’s and again asks about their opinion. If they were OK with the first meeting, another meeting is set. And these meetings continue until reaching a result (yes or no). If it’s a yes, the couple starts knowing each other more by having closer relationships, hanging out, etc. Many get married immediately (religiously, called ‘Aqd’ means ‘commitment’) but don’t start their independent life earlier than about one year later to reach more mutual understanding and also preparing their house for living. When a formal marriage happens, the man is obligated to pay for a gift -called ‘Mahrieh’ to the woman. These days, the normal amount is grown a lot up to more than 100 golden coins! -however, this gift is often only written on the paper and it doesn’t realize. There’s a local proverb that says “who has given and who has gotten the Mahrieh?!”- The man has the primary right for divorce but he has to pay for all the woman’s right beforehand. If the man isn’t performing his tasks such as paying for the family life or he is addicted or is criminal, the woman can also ask the court for divorce and claim for half of the living assets.

Now, let me tell you about my own experience which was also occurred in the traditional form. Although I’m living in the megacity of Tehran, I preferred getting married with a girl who was one of our relatives (The daughter of my mother’s cousin!), so that I could make sure that I knew her family well and trusted them more easily. However, I didn’t know the girl much and we hadn’t even spoken to each other never before. We had about 5 ‘Khastegari’ meetings (each about two hours of private talking), all held during one month until we reached to a mutual agreement (I know you may say that’s very short time for a lifetime decision! And I can say I was pretty lucky as in most cases that takes more time!). In these meetings, we concentrated on the most important aspects of our future life and understood we think and act quite similar in these aspects. We got married a few weeks later and our independent life started after one year. During this period, we hung out a lot and many days I came to their house or vice versa. And now I’m very satisfied with my marriage. 🙂

Now let me say how it works: People start with the ones who they trust in their social networks which reduces the future risks a lot. Then they speak only about the main issues rather than details or unimportant preferences. They don’t make very emotional and romantic relationships in these first stages (as the meetings are held within the families in a limited time and so they’re really to-the-point) as a result, they can make very rational decisions about their future. Then they get married immediately to make their relationships healthy and committed. After that, the relationship becomes very friendly and romantic! Deep ‘love’ and ‘adaptation’ are the two main principles of an Islamic marriage. ‘Adaptation’ means the couples have to tolerate each other’s weaknesses and keep the family alive even in difficulties as long as possible -of course, unless there’s a big mistake by one side that makes divorce the only remaining way.

People stay in their primary family often until they get married, i.e. usually until their thirties. The family supports them by providing every material need and this support usually continues even after the marriage by paying for all marriage expenses, helping them in the first stages of life, and in taking care of the children, etc. (The direction of helping is then reversed when the parents become old and need to be looked after). When we talk about ‘family’ (with a similar word) in Iranian culture, it often means a large community, Including the grandparents, uncles, aunts, cousins… as all of these relatives keep their close contacts and meet each other frequently. So, there are different words used for the ‘small’ (parents and children) and large family and different words for uncles and aunts belonging to the father or mother. These linguistic differences implicate how family culture is different from English culture.

The family structure is traditionally based on the parents. There is usually one private room for the spouses and one or two for the children. So, it’s usual that the children live with each other in a shared room, especially in the traditional populated families; however, these days, the couples prefer to have only one or two children. They usually come together at least for dinner and talk.

In Islam, the man, woman, and children, all have special tasks and rights. The man has to work outside and earn money and pay for a comfortable life for the family -the wife can even claim the husband officially for not providing the required financial resources for her normal life. He must behave his wife with love and respect, listen to her in any important decision in life, and help her in the house. The woman should manage everything inside the house so that everything is in discipline and well-organized. She must take care of the children which mostly deals with their ethical nurturing and development. They know this as the most valuable job to create a ‘real human’. All these can make a real full-time job for a normal woman with at least three children. I always think it’s ridiculous to call this large number of women in the country as ‘excluded from the economy’, though they’re obviously creating value. If these women worked in the formal economy, then there was a need to spend much money on caretakers, kindergartens, janitors, etc. to perform all these tasks and maybe with less quality. This justifies the man’s task to resolve any material needs and any worries about outside from his wife

Furthermore, in the Iranian traditional rural life, it won’t be exaggerating to say the women make the main proportion of value-added for the community. They not only handle everything in the family -children, cleaning, cooking, events, etc. but also, they participate in all livelihood activities such as farming, caring the animals, producing dairy and textile, etc. The men were only supposed to do outside and heavy jobs that I believe are really easier and simpler than what women do.

These days, in many urban families, women work outside of the house these days to help to provide the expenses of the family or simply for their own desire and this is well-accepted in the society (in cities). Nowadays you can see many women working in private companies and public offices, however, not as a majority. In public places such as shopping centers, parks, universities (about 60%), cinemas, and streets the women have the same or more attendance. In Islam, there’re absolutely no limitations for women to be in public as far as they have their Hijab and they have neutral -not sexual- relationship with men.

Yet, the women encounter limitations regarding the social expectations in taking high positions in the organizations especially in the public sector. Even competent women don’t enjoy equal opportunities and even if they become a manager in public organizations, they’ll witness issues with legitimacy. But according to the national laws, the women can participate in all elections and be employed in any jobs except as a president or a judge (no limits to become an MP or a lawyer, etc.). These exceptions are rooted in Islamic teachings with the specific rationale that the men and women aren’t the same and they have differences that fit them for different roles and jobs (just as the men can’t perform some jobs as well as the woman). But these differences don’t bring virtue but the only criterion for that is Taqwa (self-control) (Quran, Hojorat, 13) which can be reached by both genders. Some of the important and great characters in the Shia history have been Fatima and Zeinab and also the highly-respected women in Quran like Maria and Asie are all examples that show a woman can reach higher positions than most of the men.