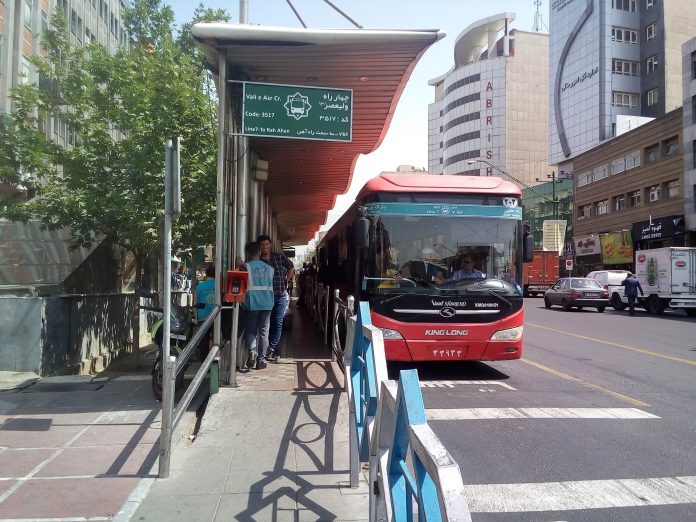 Tehran is the capital city of Iran and there is a problem of traffic jam in many parts of the city especially in peak-hours of the working days. During recent years, the main solution adopted by the municipality to address this problem has been developing the public transportation system, especially the metro. Metro in Tehran is now about 20 years old (since 1999) with 3 million ridership each day. The stations and the train are quite new, modern, and clean. There are escalators in almost all the stations, but unfortunately, not all of them are equipped by elevators, so it may be difficult for disabled people. Smoking is forbidden in every part of the metro stations even in open areas.

When you arrive at Imam Khomeini International Airport (IKIA) which is about 30 Km away from Tehran, you can take the metro to reach the city. Every 80 minutes, from 6 am until 8 pm, there’s a train that goes from the international airport to the city and vice versa and it costs 90000 Rials (less than one euro!). But not in all the metro lines the trains pass such few and they even cost cheaper. In most of the lines there are trains every 5 minutes (during regular hours) and a one-way ticket is just 12000 Rials. If you want to make your travel even cheaper and more convenient, you can buy a chargeable ticket card from the ticket offices inside the stations. Then you have to check-in and check-out to pay only as long as you ride (in some of the stations, there’s no gate for exiting so you have to check out on the small machines installed on the walls). It is possible to charge these cards from the automatic ticket machines; however, the machines are in Persian and you need Iranian bank cards for paying. There are 50% discount cards for the students and elders which makes rail transportation really cheap and affordable for them. All types of cards can be used in all trains and buses. So, it is very cost-effective to buy these cards. Remember: there is never a ticket check inside the trains. So please pay for your cheap trips as a good citizen!

Another thing to notice: In all the trains there are one and a half wagons at each end occupied only for women. It doesn’t mean that women are not allowed to enter in the other wagons but the men must not enter the women-specific wagons. It is both for the religious purposes and making the opportunity for women to be more convenient, especially in rush hours (i.e. about 7-9 and 18-20) that the wagons are really dense by the population. It is also true for buses. All the buses are separated into two parts. In BRTs the front door and for the other buses the back door is only for the women and inside the bus, two parts are separated by iron bars.

The wagons are pretty new and modern usually facilitated by an air ventilation system. There’s a microphone inside each wagon that you can talk to the train driver in times of emergency. The people are usually working with their smartphone (playing a game, surfing social networks, or reading ebooks) as in most of the routes, online mobile data is workable (except the majority that simply are doing nothing!). There are vendors selling different things like socks, toys, computer accessories, etc. These businesses are illegal and the police have tried to confront it but it hasn’t been successful as you can see them a lot especially in off-peak hours.

The metro and BRTs are connecting all main parts of the city including the two airports, and the intercity central rail station. But public transportation is not limited to the metro and bus. A big proportion is done through the taxi system. The taxis are in different kinds. The first type is called ‘telephone taxis’ which is found everywhere else: you telephone the taxi agency and ask for a car to your destination, then a taxi is sent to you. From two years ago, this business is changed enormously by appearing the online taxis. The most famous one is ‘Snapp’ which is a smartphone application (like Uber) that can be downloaded from Google Play. The taxis are not formally registered anywhere and the drivers are normal people who do it as their main job or as their extra income source. To catch another type of taxis, you can also stand beside the streets and ask the passing cars to take you to your destination. All of these are different forms of ‘Darbast’ taxis.

The second type of taxis is called ‘line taxis’ which travel a fixed way and return back. They have specific stations and people who want to go that route, know where to wait. They usually wait at the beginning point until the car is full (4 passengers) and then the ride starts. These taxis are most of the times colored yellow or green and they are known and formally registered in the municipality.

The third type is asking personal cars which are usually going straight their way who are seeking for passengers in this way. You just need to stand beside the street and if a car driver wants to pick you up, they speed down and turns close and the driver looks at you. Then you can shout your destination or just say ‘mostaqim’ (means straight)! It is the fastest, easiest, and cheapest way for short and straight paths. (Something that I really felt had missed when I was living for a short time in Europe!) It is also the only way to earn income for a large number of unemployed people in the country. This type is even done on the motorcycles in Tehran which makes a faster way to getting rid of the traffic jam. Noisy and pollutant motorcycles are found everywhere swerving between cars and even in pedestrian zones, as a way for avoiding traffic and the problem of finding parking space.

These days, the municipality is promoting biking as a replacing way of transportation and there are some enterprises who offer bicycles for rent. However, it is not chosen by many people due to the extremely cheap public transportation and very cheap gasoline which makes it much more efficient to use your car or motorcycle. Also, Tehran is built on too uneven land and is sometimes too difficult to pedal along with the south-north ways.