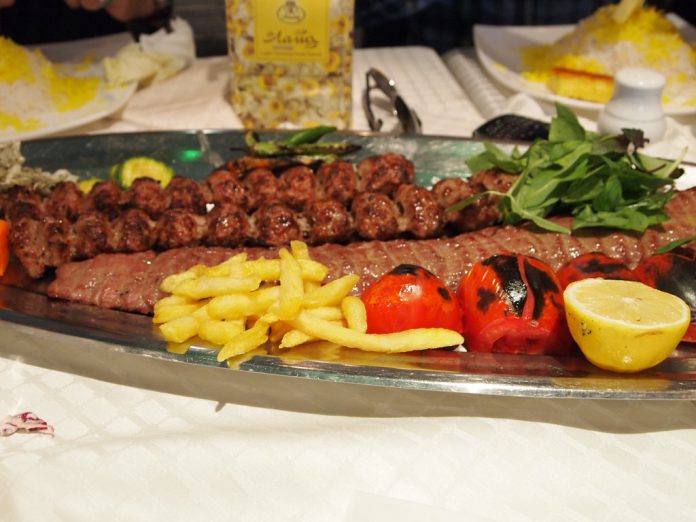 The Iranians traditionally accentuate their food -just like most other eastern nations. They spend a lot of time cooking each day and eating a good meal is the main part of their parties. Known as an important sign of their hospitality, they sometimes spend more than a whole day for cooking different types of food for a party with their family. Bread and rice are the basic constituents of most of the Persian food; e.g. they eat food including rice for lunch and food accompanied by bread for dinner on a regular basis. Bread is usually in the form of Arabic bread (called Lavaash or Taaftoon) or other special Persian types called Sangak or Barbari and the usual European bread is consumed only for special sandwiches. The breakfast is also something with bread but it is often an uncooked food such as bread and cheese or bread and jam or honey usually with butter. Especially in parties, different salads and jelly are also served as a dessert after and before the main dish. The salt and sometimes pepper are always present on the table. After lunch and dinner, there might also be some drink. Types of Cola and Dooq are the most common and sometimes non-alcoholic beer (known as Delester; the first mover brand. Pay attention not to call it ‘beer’ as it’s known only in its alcoholic form!). Dooq is a kind of white drink made of yogurt and water, sometimes bubbled with a little sour and salty taste. The most usual drink which is served frequently through the day is Tea.

The meals are also an everyday opportunity for gathering relatives around one table. If there’s a big party that doesn’t fit around one table, usually people sit around a long piece of plastic on the ground called ‘Sofreh’. There’s a norm of respect for food, bread, and Sofreh in Iranian culture because these are known as the God’s gifts and for example, we shouldn’t put our feet on them or we shouldn’t waste or throw them away unused. When people want to eat together, there’s a custom that they don’t start until everyone is present. If you are invited for a meal at home, the host -more or less- sees what you eat and how much! And offers you more if your dish is empty (it is called Ta’arof and its intensity differs in different cities but it generally exists everywhere. In some cultures, they even pour some more food to your dish without your permission!). They know this as part of their hospitality tasks, so they are not prying. There’s a Persian proverb that is “the guest is the friend of God” so we have to serve them the most. It is not polite to leave some food uneaten in your dish if you’re a guest. And also note that the Iranians use spoon and fork to eat their meal and knife is not typically put for everyone. Cooking is also a hobby. Some go out to parks and gardens for a picnic and bring cooking tools and materials with them. However, many of these customs and norms are disappearing or changing in some of the modern families.

And now about what the Iranians eat. Every city and region in the country has its own specific kinds of food. Yet, some types are popular all around the nation since old times. One of them is the Persian kebab, which is lamb’s meat and fat barbecued directly on the fired coal (another type of Kebab is cooked by sliced chicken meat). This is a very popular food that people usually eat when they go out for a picnic and this is usually eaten by rice. Also, there’s a family of different food that’s called ‘Khoresht’. These consist of food cooked and boiled in water and served again with rice. The most known one is called Qorme Sabzi, the main part of which is vegetables and fried beef, fully cooked in the water. Another one is called Qeime containing Lappe (ُSplit-pea) and beef plus tomato paste. And also, Fesenjoon containing chicken, pomegranate paste, and sliced walnuts. Over all members of the rice family, one tasty part is Tahdig (literally means ‘bottom of the pot’) which is usually fried bread or potato put under the rice inside the pot to become crispy. The other family includes the food served with bread; Shami, Cutlet, and different types of Kookoo are famous ones. These usually contain potato and eggs, and sometimes meat. Another type is the family of watery food such as soup, Abgoosht (means water and meat, also called Dizi), and Aush. Soup (if as the main dish) and Dizi are also usually served with bread by chopping bread inside it.

These days, many prefer to buy their food at least once a week from outside than cooking at home, because of their businesses and lack of time. The outside shops selling prepared food are in two main types: Fast food and normal (traditional rice food). These days the fast food is consumed a lot, for example, pizza and hamburger but mostly for special occasions and bought from outside (Nowadays, a more proportion is buying food from online websites such as Reyhoon.com).