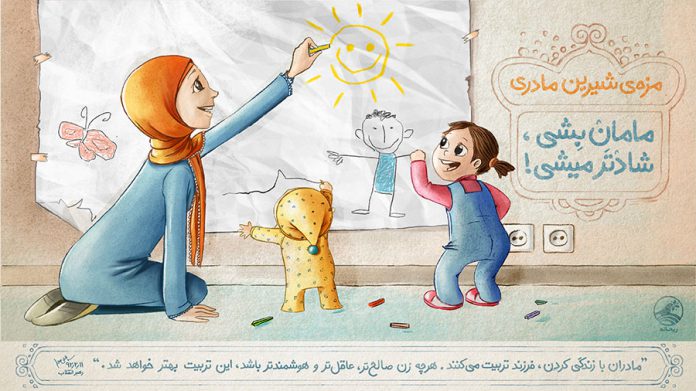 This is not so many years that Valentine’s day is known in Iranian society. Some shops and markets sell the red symbols for Valentine’s gifts when it’s close to this day. Although it’s getting more popular among modern young boys and girls it hasn’t been that widespread yet in the society.

Sepandarmazgan is the name of the love day in ancient Iran which is celebrated just four days after Valentine. This is rooted in Zoroastrian Persian customs date back to the Achaemenians, the first Persian empire. At that time, there were special names for each month and day and when the names were similar -here, the “Spandarmaz”- it was a feast. On this day, the men used to make liberal presents for their wives (Wikipedia). However, this event also isn’t known well and celebrated throughout the society these days.

But what motivated me to write about this topic was the fact that the Iranian Mother’s Day -and Women’s day (they are the same)- is coinciding with Valentine and Sepandamazgan this year. Love is most realized in the Iranian culture inside the family starting when the marriage occurs (see this post) and maybe that’s why the love day isn’t culturally separated from Mother’s Day. This day is on the birthday of Fatimah, the prophet Mohammad’s single daughter who is known as the best woman in the history in the Islamic view (together with Khadijah, Maria, and Asiya). She was not only the best regarding her integrity in the personal and family life and worshipping God but also in her social activism; enlightening the society about the best ways of living and speaking against the oppressors in power. The narratives available from her life are not only useful for the women but for every humankind. The day was introduced after the Islamic Revolution in Iran and is celebrated each year as the official Women’s Day.

There’s often a celebration on the mother’s day -or the evening before that- in most families. Men and children usually start thinking about what to buy as a gift for the mother from days ago. The flower shops are full of crowd and there’s a big market for the women’s accessories and home’s goods.

In general, there’s a deep feeling about the mother in Iran and children feel so close to their mother -among everyone else in the family- and this continues to the end of life. If you want to impress an Iranian, just speak to them about the mother!

Pollution or virus, fresh air is what’s missing these days in Tehran