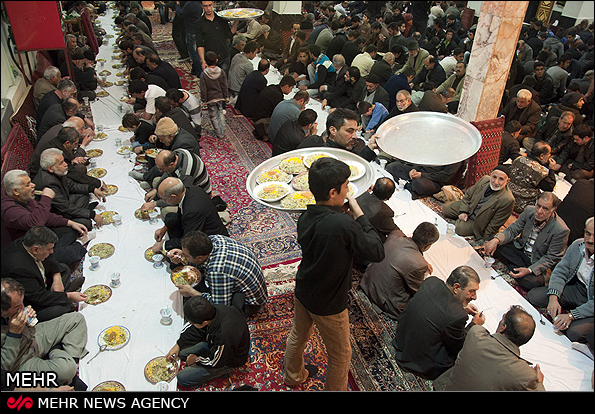 Shiite Muslims worldwide are commemorating the most important days in their faith’s history during the first month of the Islamic calendar, known as Muharram.

Since this significant time in history, Ashura has manifested in ritual mourning, remembrance, and atonement as a form of holding witness to the moral principles of Islam through Imam Hussein’s refusal to assimilate to tyranny. Physical rituals take the form of prayers, Quranic recitations, sermons, and elaborate processions and reenactments of the Battle of Karbala.

As is common within Islam, distributing free food to honor the sacrifice of others is a mainstay ritual of Ashura.

In Iran, traditional food is distributed as Nazri (free food), like Ghorme Sabzi or Adas Polo, but the most traditional meal prepared for distribution is Gheymeh or Gheymeh Nazri (also the predominant food for Ashura in Iraq).

The food is considered holy for anyone who eats it or makes it. It is given free by individuals and private groups as a way of completing an offering made to God in honor of Hussein’s martyrdom.

Often cooked in enormous copper pots over wood-burning fires, and then served in disposable containers that litter city sidewalks for weeks, the food is believed to have benefits both physical and spiritual.

Kiosks called hayats are set up all over Iran. In the capital alone, there are now nearly 13,000 registered hayats making offerings of food or drink. Everyone from rich bazaar merchants to high school kids takes part in the cooking and serving of the food.

In Muharram and in Ashura days, you can see people who line up to get Nazri foods. They do it because Nazri foods are very delicious.

Many irreligious people and those who are non-Muslim eat Nazri food in Ashura day, only because it’s very delicious. Some say: “The Ashura day is like a festival of food. Many are in the streets and enjoy foods and seeing each other’s in the streets. In fact, it’s like what has happened to the religious days in the US and other parts of the world.

In Ashura day, you can see the ordinary boys and girls that have a Nazri food in their hands, or eat Nazri foods with each other’s, and are happy and enjoy their day.