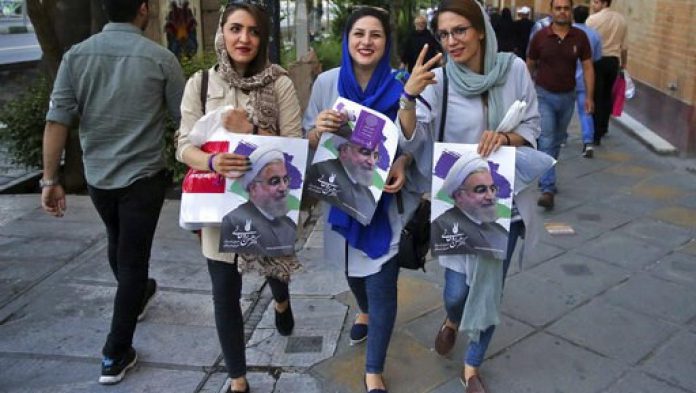 Writing about ‘freedom’ is so difficult, especially in middle east countries like Iran that every small thing can be politicized and make a lot of controversies and debates. In Islamic thoughts, there’s a broad definition of freedom that is ‘making the humankind free from any obstacles that prevent them from making the right choices and moving toward growth’. In the Quran, it’s pointed out as the mission of the Prophet:

As Molavi (Rumi), the famous Persian poet puts it:

The main mission of the prophets was making humankind free from external and internal (including the inferior wants such as hunger, gender, and anger) factors controlling their behaviors and finding what’s truly best for them. “Freedom, Independence, and the Islamic Republic” was the main slogan of the Islamic Revolution in 1979 in Iran and these are asserted clearly in the constitution. Here I think we can limit our discussion to social freedom and also political freedom in another post.

Regarding social freedom, there’re strong social norms influencing every part of the Iranian lifestyle. You have to be the same as the others if you want to be accepted in society. A big portion of these norms come from the religious beliefs of the people. The government has its roots in these deep religious sensitivities and wants and identifies its aim at preparing the ground for everyone to behave in Islamic rules. Some parts of the government believe they have the right to use the hard power to realize these rules, especially in what is visible in the society like Hijab (the special form of wearing in Islam to cover all the body except the face and hands). There always exist challenges between these parts of the government and those people who don’t want to behave in Islamic forms (especially Hijab but also other issues such as free visible sexual relationships, free drinking, etc.). They say the government and the religious people must tolerate the other favors in the society, either they are majority or not.

The continuous civic disobedience of these people and groups (organized these days through online social networks) supported heavily by international organizations and foreign Persian media has resulted in a lot of change in the recent two decades in social limitations. In the past, there was a special type of police (called Gashte Ershad) for controlling these behaviors in the public and if anyone was, for example, offending the law of Hijab, they would be arrested for some hours and mandated to pass some classes! Nowadays, such police are almost never seen anymore in public places (though, its termination was never officially announced). Anyhow, the trend that I’ve observed in the recent 20 years has been a fast move toward more freedom in women’s clothing, boys and girlfriends hanging out, girls biking in the street, people eating in Ramadan, and people dog-walking in parks. The police behave neutrally in these cases especially in Tehran and other large cities except if it is felt that they are running under a systematic and large movement against the law. Yet, it’s totally different from what’s now present in the west, the main part of which roots in the social norms and expectations and not necessarily the government controls, I think (for example, prostitution, nudity in men and women, LGBT, etc. don’t seem to be accepted by the society in general as there’s no explicitly forbidding law). Also, as I wrote before, in some of the public places such as gyms, hair salons, schools, etc., there’s a strict gender distinction which is different from European countries.

This trend is the same for the freedom of media. Somedays in the past at the beginning of the Islamic Republic era, even video players were prohibited in the country! All the national TV channels are owned by the state. Foreign TV satellite receivers were, and still are, prohibited for the household uses. Although the ban still exists, it’s not seriously enacted and they’re widely used.

The most recent change was the internet and online networks. Previously, the government used to censor even the weblogs and opposition political websites. 3 out of 5 most globally popular social networks are censored in the country: Facebook, YouTube, Messenger (except WhatsApp and WeChat) but the people have different VPN applications installed on their smartphones and PCs to cross the censorship walls. Even the politicians and officials have frequent activities on these networks and there’s a big debate inside the government about this kind of censorship. In 2014 a new application called Telegram was started its work in the country with vast features not only for chatting but also for blogging. This app reached about 40 million users very quickly as people found the opportunity to use a completely free online space. Then it suddenly was filtered in 2018, however, many still have access to this through VPN apps. It’s however nice to mention that the government argued the censorship in case of Telegram wasn’t for political reasons or even for the pornographic limitations, but for national security reasons. Anyhow, I always think that freedom of media and fair equal rights to speech are very good, however, the benefits of this freedom mostly return to those who own the media and know how to use it… as it’s the case for rich international powers who pay million dollars to media in order to oppose the Iranian regime. And that’s why the government isn’t so happy with complete freedom!

Anyway, I think there’s no barrier for anyone on the internet anymore in Iran and there’re fairly equal opportunities for different opinions to express themselves online. I believe the problem with the government in Iran is that it starts to think about these matters very late and then puts itself in confronting position in front of a large population by using very hard power.

Although the online media has changed the playground of political activism, there are still strict limitations on journals and NGOs in Iran. There must be no explicit opposition with Islamic laws, the hardcore of the government, and the main general national policies. The government justifies these restrictions as a natural reaction to the long past experiences of the country about foreign Interventions from the world powers who have always tried to reach their colonial goals using the media and civil society organizations. Although that’s not false, it might not be a good reason anyway! I’ll write about political freedom later in other posts.