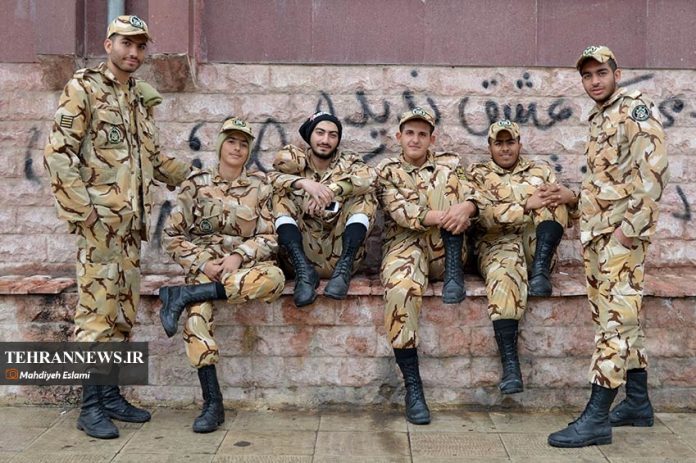 Finally, I defended my PhD thesis last month and that means I finished my 24 years of continuous education. Now like many other Iranian men, I’m dealing with the next stage of my life, the military service!

The compulsory military service started about a century ago in Iran. Now every Young man reaching 18 years old is obliged to do [almost] free service for the national military forces for 24 months. This includes about 2 months of military skills training inside a garrison and the rest is providing civil service for a public organization. The different types of public organizations include the army, IRGC, or the police. The draftees are randomly assigned by the General Staff of the Armed Forces of the Islamic Republic of Iran. In many cases, esp. for the singles, the draftees are obliged to live in another city for these two years.

The service is often facilitated for the married and educated draftees (eg. they can go home every afternoon). Also, the dads can enjoy three months reduction in their service for each of their kids.

The society widely perceives the military service so inefficient exploiting the youths for no considerable added value (of course, this about 500,000 young men are cumulatively doing a huge work for the military forces). That’s why they try to get away or delay the service as much as possible. There’s no direct supervision to push people into the military service, however, the final certificate is necessary to receive important social services such as participating in the driver’s license exam, becoming employed, and crossing national borders (and even passport issuance). All these are enough to get many people in. But despite these penalties, many prefer to postpone their service -being ‘absent’- and give up all these public services and save their two-year opportunity costs instead.

However, there are many exemptions that may delay the start time, decrease the length of service, or even cancel it. Some of the most-used exemptions are:

Also, the sons of a man who had attended voluntarily as military force in the war, can make it to reduce the length of their service.

What are the other alternatives?

To make the service more efficient, well actions are taken in recent years. Some of the state organizations -not necessarily military organizations- can select and recruit up to a certain annual quota of the draftees enabling them to provide their service inside that organization. It’s called Amrieh. The main target groups for Amrieh include the teachers and doctors. Another option for university students is fulfilling a research project for a public organization instead of the whole or part of their service. One way of doing so is being subscribed to Iran’s National Elites Foundation if they can provide well-enough academic background -that’s the way I’m passing my service now. Also, the ones selected as faculty members in the universities can count four starting years of their membership as a substitute for their military service. In recent years, as the country is paying more attention to growing startup companies –the “knowledge-based companies”- among young Masters graduates, they can do their service inside their own companies up to a certain quota -either as Amrieh or research project replacement. The good thing about these new forms of military service is that not only the service is chosen by their more consent, but also it’s compensated with a minimum wage. Yet, most draftees are not able to use these alternatives (only about 3% of the total!).