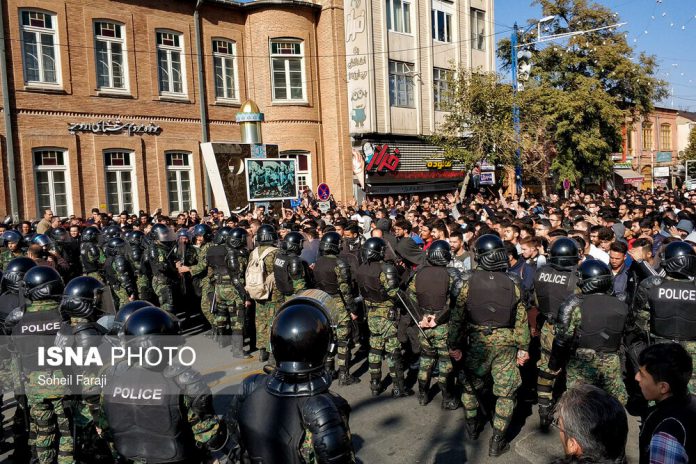 In Iran, you always have to be ready for unexpected situations and news! One week ago, right on Thursday night -the night before a national holiday and Iranian weekend- the Iranians were shocked with an announcement about the new price of petroleum. The petroleum production and distribution are done by the government in Iran and so is its determination of price. The petroleum price which was 1000 Tomans for about 8 years, suddenly jumped to 1500 Tomans for up to 60 liters of consumption and 3000 Tomans for more. Of course, these prices are still absolutely cheap comparing to the other countries (less than 0.3 euro!), but it’s anyway, now tripled and that’s a shock! The government explains that’s to avoid the huge amount of petrol trafficking and also to make a fairer distribution of the public resources and decreasing the stunning fuel consumption in the country.

When people woke up on Friday morning they were surprised. The public protests started from Saturday in which Tehran experienced unusually heavy autumn snow. All the streets and highways were jam locked and it made people angrier. The officials said there won’t be any problems with silent protests but there was high violence especially in small cities and marginal areas. Many public places, gas stations, banks, stores, and even houses were destroyed. Some believe that this form of destroying was so odd in the recent history of the country that it wasn’t done by the normal people, but the gangs of criminals who used this opportunity. Unfortunately, this violence was backed or at least justified by the foreign Persian TVs -BBC, VOA, etc. Some statistics show that about 200 people were killed during the three days. The bad side is that there’s no formal permit for any form of demonstrations in the country in such situations, except those run by the government.

The government reacted more or less the same as usual in such situations. The police special security force was mobilized all over the city and sensitive locations scattering the crowds and arresting the leaders. Further, the access to the global internet and online social network applications was restricted so that people couldn’t get organized on the streets and don’t have access to the video clips of what’s really happening out there. We only had internal websites and applications working. They also closed schools due to the snow and cold weather! However, that wasn’t just a stick policy, but on the carrot side, the government started some populistic actions, the main one was adding about 55000 tomans to the monthly cash transfer for seventy percent of the population -so, that’s now about 100000 tomans for about 60 millions of the population!

The next sequence of this movie was the public announcement of the government for its supporters to demonstrate on the streets and condemn the violent protests in nearly all the cities to show that although the majority might be dissatisfied and deal with economic problems but still support their security and state. Also, making short news reports and documentaries showing how what happened was unpleasantly directed by the world powers and enemies to use the opportunity of public dissatisfaction to make a disaster for the country and regime.

This movie has more or less happened the same way in 2009 and 2017 and it’s likely to happen more in the future by widening online social networks in the country. However, its trend seems to become more aggressive, with a more economical theme and thus more in lower social classes and small towns, and without any voice inside the government and formal politics. I’ll write about those happenings, especially about the 2009 election sometime in the future.

How Iranians lost access to the world wide web for one...